Such crazy weather this summer — lots of rain, sticky hot, then shiveringly cool, knock-you-over winds that come out of nowhere, then sunshine, blue skies and peace. Here’s a sample of clouds from last Thursday where the weather wasn’t quite sure what it wanted to do — nice day? or storm? And yes, I took these from my car while driving. Go figure… 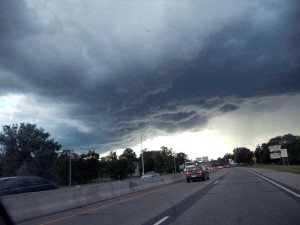 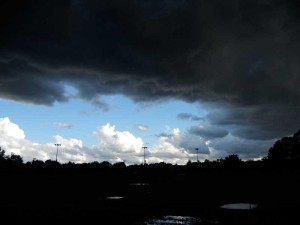 I was supposed to go horse camping this weekend but the horse of the person I was trailering with came up lame. There were still two women going but they were staying the whole holiday weekend and that was too long for me. So I went to plan B and was going to go for a short, local trail ride on Friday, then trailer to the park where my friends were camping on Saturday and spend the day riding with them. If Luke seemed okay, I’d stay over night and drive home Sunday. Otherwise, I’d just drive home on Saturday after riding for the day.

Friday turned out to be very cool, overcast, and winds were gusting up to 47 mph — not exactly great trail riding weather.

On to plan C. The stable owner and I decided to ride in the indoor arena. We did our own thing for about an hour then set up cavelettis on their lowest setting and trotted over the poles. I love that high stepping, floating feeling, and it gets Luke to lift his back, which will help his canter. Then we cooled the horses out by riding a little ways down the road and back.

Saturday morning, I loaded Luke up in my trailer and headed to Governor Knowles State Forest in Wisconsin. I stopped at a gas station near the campground. As I was heading to the bathroom I heard someone call, “Maery! Is that you?”

My friends were at the gas station picking up some supplies as luck would have it, so I was able to follow them to their campsite. Unfortunately, the site next to them was taken so I had to park across and kiddy corner from them I ended up bringing most of my stuff, including Luke over to the other campsite. 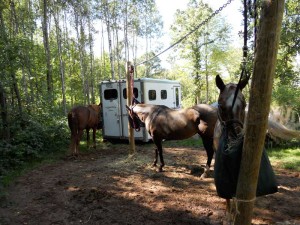 The trail we went out on took us 4 hours to ride. It was a bit cool but the weather was great and there was quite a variety to the terrain — from oak trees, to pine trees, to deep woods, and meadows. 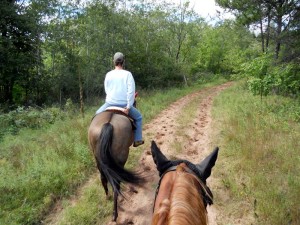 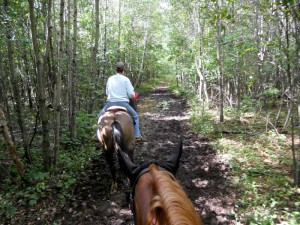 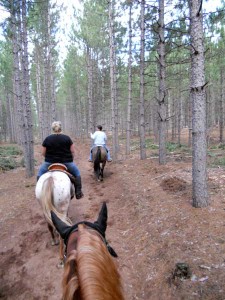 We crossed three wooden bridges. Luke had never crossed a bridge before. He looked alarmed at the first one, especially when he heard his hoofs clomping on the wood, but he didn’t hesitate, spin, or put up any kind of fight about crossing. By the second bridge, he was pretty relaxed about it, and I was very pleased.

The river was too high and fast so there was no water crossing except some of the puddles we had to go through.

Luke was pretty tired by the time we stopped back at the campsite and had lunch at about 3:00. Or was that dinner? The horse eating from the feed bag is Luke’s pasture mate. 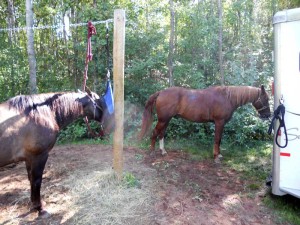 I didn’t stay the night. I think Luke would have been just fine but I didn’t think I’d get any sleep myself. We’ll break into this camping thing a little bit at a time. I have another chance to go for a weekend to a place that has a cabin and corrals. That is sounding more my speed as the weather turns colder. The trails sound tougher though, with more hills and a deep river crossing (up to the saddle blanket). Crossing a river would be a first for Luke too. It would be nice to start with ankle deep water but I think he’ll follow other horses, no matter how unsure he is. Now if I can just hang on and not get too wet. Brrr!

Sunday was more bike riding around a local trail system. The three rivers trail system branches and connects up all over the place. 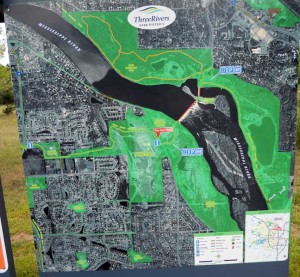 At the beginning of our ride, we were greeted by a painted pup. His dog tag said to not worry that he was on his way home. 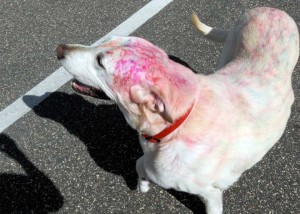 We rode to a dam on the Mississippi. 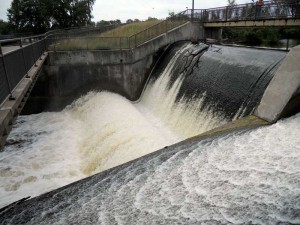 There was a nice view down the river. 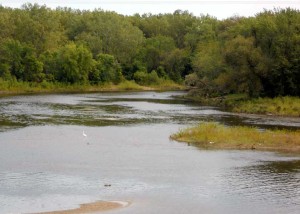 At one point, three small kids, maybe 8 years old, on small bikes were riding ahead of us. One got out of the way but the other two blocked the path and picked up speed, not wanting some old lady to pass them up. Big wheels, long legs beat little knee biters on little bikes every time. It’s physics. They shouldn’t take it personally.

We got to ride briefly on this narrow dirt trail. It brought back fond memories of my own knee biter days. I hear there are some mountain bike trails in one of the parks in the three rivers system that aren’t too terribly challenging for an old girl like me. Maybe next time… 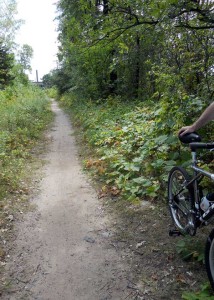 Oh, yeah, and Java’s fencing has arrived. Tomorrow the fencing should commence at last. We can’t wait! 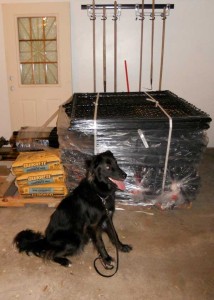 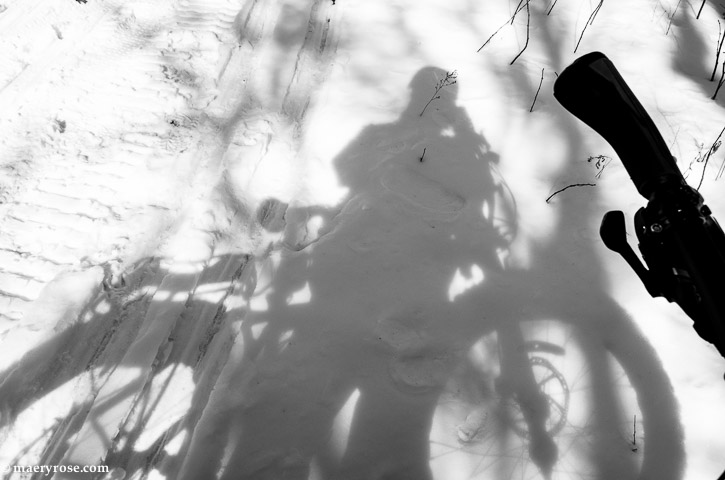 Saturday, Steve and I packed up our bikes and went to the trails behind the Rum River library because the ‘real’ fat bike trails were already closed for the spring thaw. The Rum River trails aren’t fat bike specific and have no rules except to stay on the trail during hunting season. 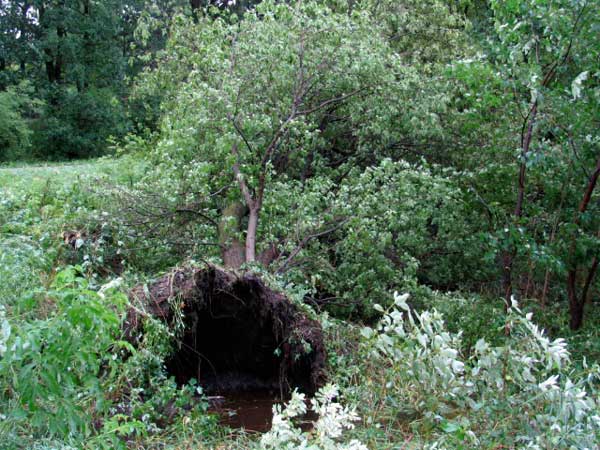 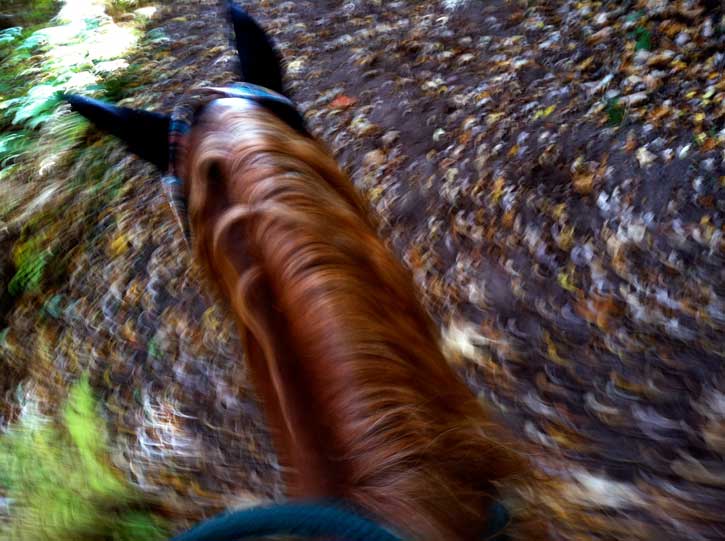 I’ve been trail riding two gorgeous Saturdays in a row, the first was at Wild River State Park. I’ve wanted to ride at this park for a long time and it was as beautiful as I’d heard. We didn’t know the Wild River trails, so we had to keep checking the maps to figure out… 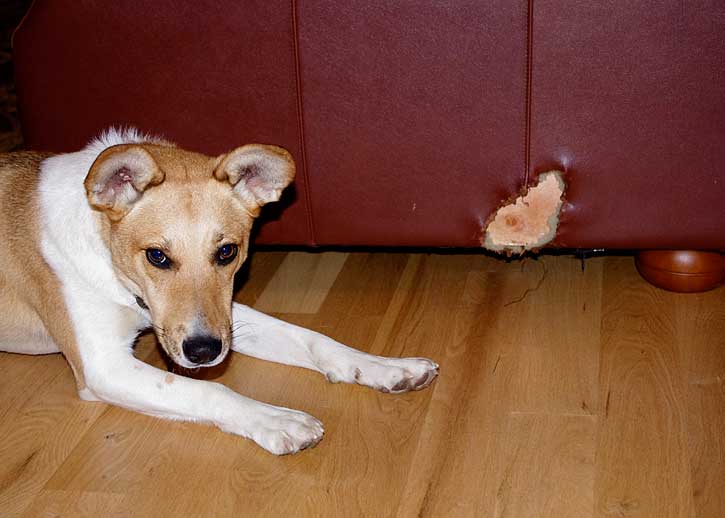 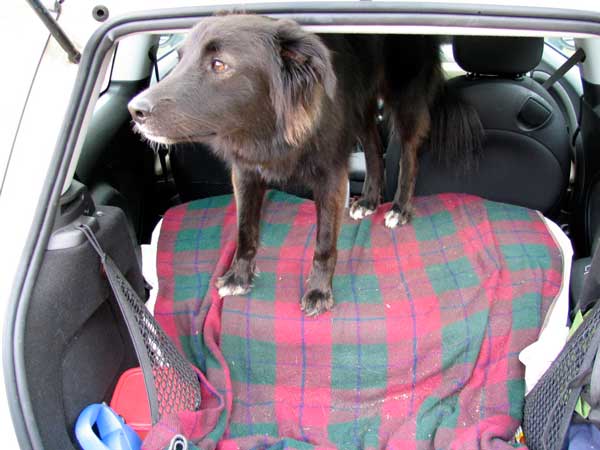