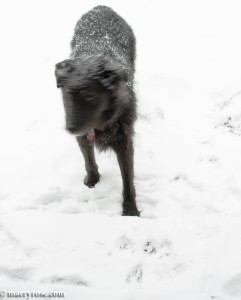 I’ve been in hibernation mode lately, like an over wintering bear, only peaking out from time to time. Hibernation isn’t easy during the holidays but I did pretty well during Thanksgiving, making turkey for Steve and I and spending the rest of the day painting my office.

The idea sounded so simple — paint the office and get rid of the clutter. Part of hibernation includes a decluttering frenzy. It’s kind of the opposite of nesting. Nesters are building a place to stay. Declutterers of a certain age are preparing to leave.

So this is how the room that is now my office looked when I was just thinking about buying my house. The walls were painted two shades of green and accented with some shiny stripes of silver between them like one big gift wrapped room. 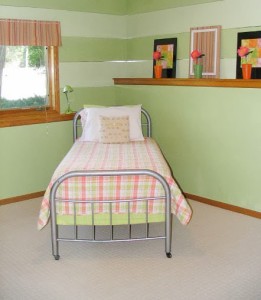 The decor, not quite my style, has been bugging me for quite awhile. First I stripped off the silver stripe, which was an immediate improvement. But it wasn’t enough. I bought the best Sherwin Williams paint, which promised a one coat magic carpet ride.

I was just going to start painting but Steve intervened and tried to sand smooth the residue from the silver I stripped off. I started painting, only to watch the paint melt when it combined with glue glop and started running down the wall like a scene from “The Blob. “

I found old wallpaper remover amongst the chemicals and unidentified containers of scary-stuff in the closet under the steps. I sprayed the glue, let it sit for a bit, then washed off the mess as best I could. The painting went better but was still having issues in a few spots where the glue must have been thicker.

I almost forgot the best part of the painting, when we reached the corner where my alarm system’s motion detector is. We thought you could just remove it from the wall. We thought wrong. Even though the alarm wasn’t set, the motion detector set off the alarm. What made this a bigger problem than it need have been was that my alarm battery was dead so we didn’t know the alarm went off because it didn’t make any noise. The monitoring service called me, wanting my security code, which, of course, I didn’t remember.

The police arrived. I tried to invite the officer to have a piece of crustless, pumpkin pie (only 100 calories per slice), but she wasn’t interested. After I assured her that we were just trying to paint a room and must have set off the alarm and provided her with several treasures of personal identifying information, she went on her way. It helped that I was in my overalls, covered in paint splotches.

Yeah, yeah, so you thought you had a fun-filled Thanksgiving…

Anyway, it took three coats of paint and it’s not quite the white I was imagining but I like it. It’s stark blankness goes with my feeling that I need quiet time to think, not think, declutter, simplify and make some decisions.

(Seriously! This is a lot less cluttered than it was!)

I’ve been through so many phases in the last four and a half years. I went through a period of doing really scary, difficult stuff to prove to myself that I could do it and that I would be okay after the divorce. I went through a faze of trying out all sorts of things I was interested in, which was really a lot of fun but also exhausting and frantic feeling. I couldn’t keep up that pace forever.

Now I’ve entered a time of simplification, pairing things down, de-stuffing, organizing and slowing down. I’ve dropped a lot of email lists about publishing and social networking your way to success, instead focusing on the writing itself and enjoying writing for the sake of writing.  Taking time to be less present online so I can be more present in real life.

We had our first big snow this week, which covered the world with a similar kind of cleansing white. 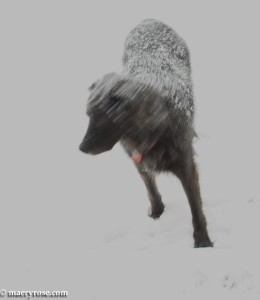 I tried to take a few photos of Java and Latte playing but my shutter speed was a bit too slow. An accident or a blur of creative inspiration? Depends on your viewpoint. This one is my favorite. 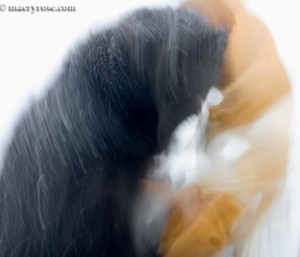 So much better than the somewhat clearer shots… eye whites and fangs. 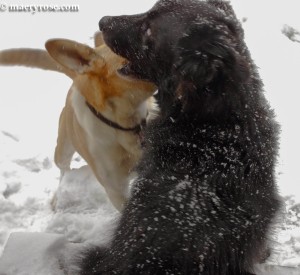 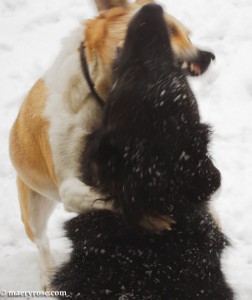 Sometimes clarity isn’t really a good thing. I like to half shut my eyes until the edges blur a bit. And look for the haze of what’s peeking out of the shadows. 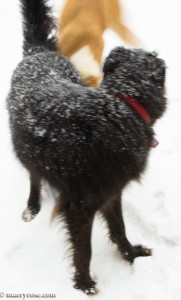