On the drive from Arizona to our California destination, we passed by acres and acres of California wind turbines. Go wind energy! 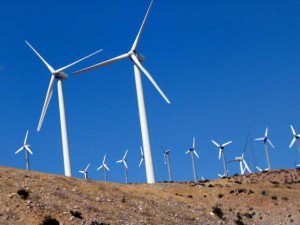 And, of course, more rocky slopes. 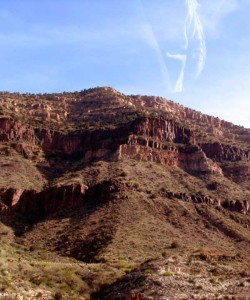 California has been getting more rain than usual this spring and things are looking very colorful and lush. I don’t think I’ve ever seen it look so green. 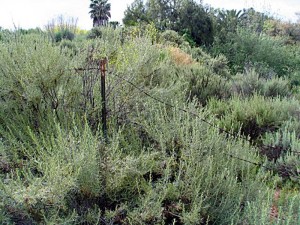 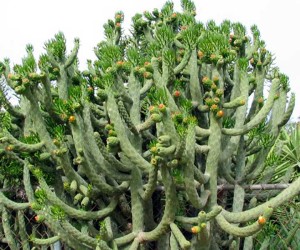 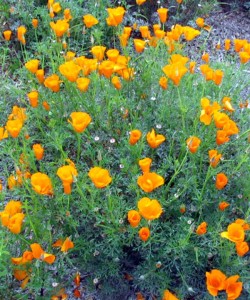 I wish I’d taken more people photos but I was only at my sister’s house for a couple days and time just went by way too fast. I do have a couple new t-shirts, a belt, and a pair of sunglasses now. My sister T is my fashion consultant. I sure wish she lived closer, not just for that reason, but because I miss her and the rest of her family already.

After a couple days in southern California, I was on my way to the opposite end of California to visit my son, Lain. I rented a car and drove because I thought it’d be fun to see the scenery along the way, play some tunes, and just have some contemplation time. Unfortunately, it was raining off and on most of the way there. I did stop for coffee and got a photo of a rainbow. 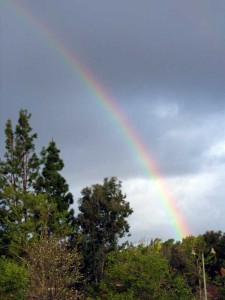 And while I was stuck in Los Angeles traffic, I captured another view of the rainbow leading, hopefully, to a pot of open freeway. 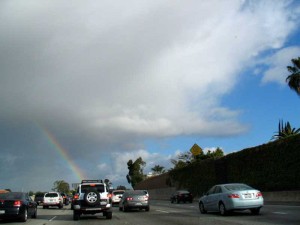 I stopped when I was near the ocean and took some beach photos. Everything looked pretty gray. And it was so windy that I had to step back from the ledge because I almost got gusted over the side. 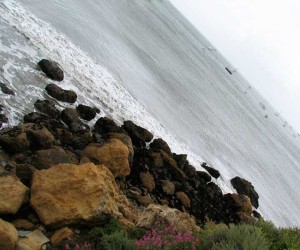 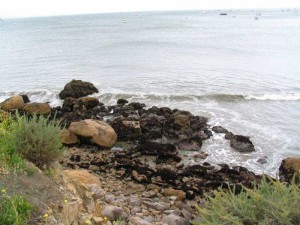 Once I got past LA, I made pretty good time and was able to have dinner with my son in Berkeley. But wait, I skipped a whole bunch of fun stuff.

Making reservations at a hotel somewhere when you don’t know the area very well is always a challenge. I generally go for the best deal in an area that seems pretty safe. I really liked the place my sister and I stayed at when we were in Berkeley a year ago but I found a better deal on Orbitz for a different hotel.

The Shattuck Hotel that I stayed at is near the Berkeley campus and has a lot of fun restaurants and shops nearby. It’s a darn fancy hotel and normally out of my price range, but there was a special and I got one night free. Little did I realize that they did not have free hotel parking so my cost went up $15 a day, but I was not going to let that ruin my stay.

So after circling the Berkeley campus a few times, which was a driving nightmare with all the college kids crossing the street everywhere, I finally pulled in front of the hotel and popped the trunk. I got out of the car and realized a guy was already grabbing my suitcase out of my trunk to bring into the hotel. I yelled, “It’s open!” but it was too late.

The entire contents of my suitcase emptied onto the street in front of the hotel. The guy was absolutely mortified and apologetic. Fortunately for both of us, my underwear and bras were zipped safely into a compartment.

I had stopped along my drive and got a jacket out of my suitcase and didn’t close it back up in case I needed something else along the way. I wasn’t expecting anyone but me to handle my suitcase. What do I know about the behavior of employees at fancy hotels? I mean, I’m crouched at the curb throwing things back into my suitcase wearing my bright red sweatshirt jacket that says “Farm Girl”. It might as well have also said “silly Minnesota hickster”.

Anyway, the hotel guy’s faux pas, caused by my lack of worldly knowledge, earned me a free breakfast for the three days I was staying in the hotel. Score!

Did I mention that I also had problems opening my hotel room door and had to get someone to show me how to open it? Honestly, I had to practically put all my weight into pushing the silly handle down to unlatch the thing!

I sat in my room and giggled to myself at the whole suitcase and hotel door incident as it is such a typical “Maery” thing to happen. I am like a constant comedy of errors. Makes life more interesting and funny though.

And I tell you, I loved my hotel Shattuck experience, even if I felt a little uncomfortable next to all the stylish people. The hotel may not be fancy to some people. but it is pretty nice in my world. 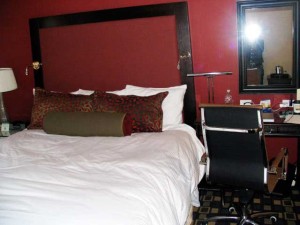 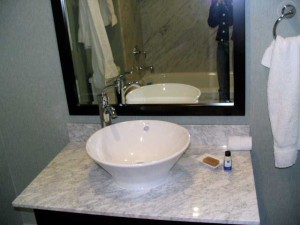 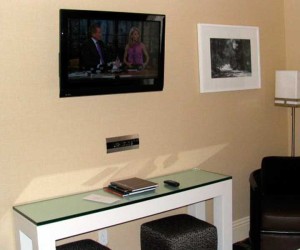 We met Lain’s boyfriend V down in the bar for a beer, a $5 beer. Geeze! But I haven’t laughed so long and hard for a long time. It’s so great to spend time with my son!

In my next post, I’ll tell you about our trip to Pacifica Beach to see the ocean. If I can edit down the video we took driving around the twisty road to a tolerable level of nauseousness, I’ll post that too.