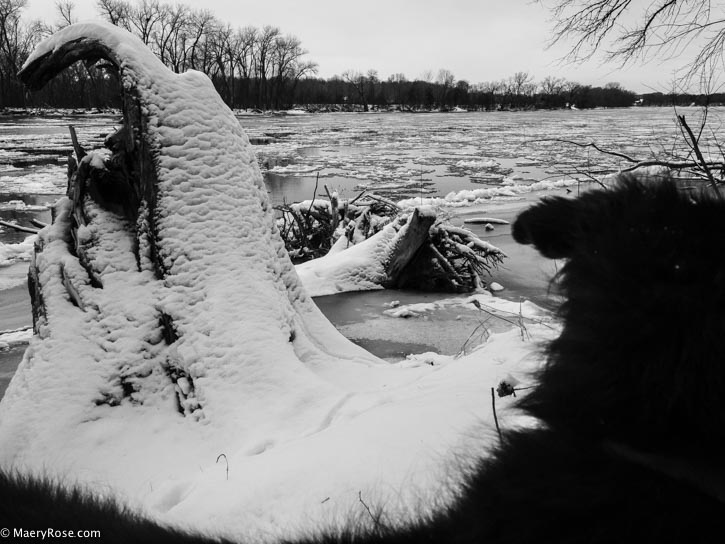 When I have a hurdle to get over, like my shoulder, I want to believe everything will be better once I overcome the obstacle.  I want to believe that after a bout of suffering and hard work, there are rewards.

Butterflies and song birds will circle my head and I will have a grand life.

If this was a fairy tale, that would certainly be the case, wouldn’t it?

Maybe not. I think someone has to die or there has to be a fairy godmother and a glass slipper, and most certainly a prince is involved.

But I can’t think of a fairy tale centered around an old woman’s cares and concerns. Stories are usually about children, especially beautiful young girls, who are mistreated and even poisoned by jealous and vindictive aging women.

It makes me want to write a different kind of fairy tale. One where the main character wears a weighted vest through the enchanted forest to help build the bones in her spine and hips. She swings along the trail with her hiking poles to maintain her balance, assist her up and down hills and stab candy wrappers and plastic bottles to toss into the garbage bag that hangs off of her backpack.

This little old woman doesn’t live in a shoe with so many children she doesn’t know what to do. No, she lives in a house, growing herbs for her tea and medicines and vegetables and beans for her one pot meals. She is an inspiration to young women.

But there has to be more to a story than that to prevent it from being boring.

A good story needs to have…

A Protagonist With an Unmet Desire or Life Challenge

A protagonist may appear to have a typical life in many ways but you soon learn they have an unmet desire or challenge in their life.

There was an old woman who was trying to be a good sport by participating in a curling event with her coworkers. She didn’t usually participate in such department activities but since she was retiring in two months and it would be the last time she had to deal with that type of social pressure, she hated to say no.

Still, she had osteoporosis, which brought with it a terrifying fear of breaking a hip falling on the ice. She had decided to retire early, four years earlier than was financially wise, because she wanted to make sure she would have time to pursue her traveling, bicycling and hiking adventures before her bones and the effect of her autoimmune disease got any worse.

Was it really worth the risk of going out on the ice because she more afraid of disappointing people or making them angry than she was concerned about her own welfare?

One would have thought an old woman was too wise to still care so much about what people thought about her, but it appears wisdom was not yet a gift that age had bestowed on the old crone.

Generally, a crisis occurs that brings the problem out or further distances the character from their desire and tips their life upside down. You likely already know this part of the story.

The old woman falls on the ice and fractures her shoulder and tears her rotator cuff. At least it wasn’t her spine or hip as she feared…

The old woman lambastes herself for being so stupid. Her fears of not being able to pursue her lifelong retirement dreams increase daily as pain and immobility drive her into darkness. The accident worsens her previous fears by indicating that her osteoporosis is already worse than she thought it was.

She dreams of doctor faces, looming over her, twisting and contorting like an image in a turbulent pool. “Brittle bones! Brittle bones!” they hiiiissssss. 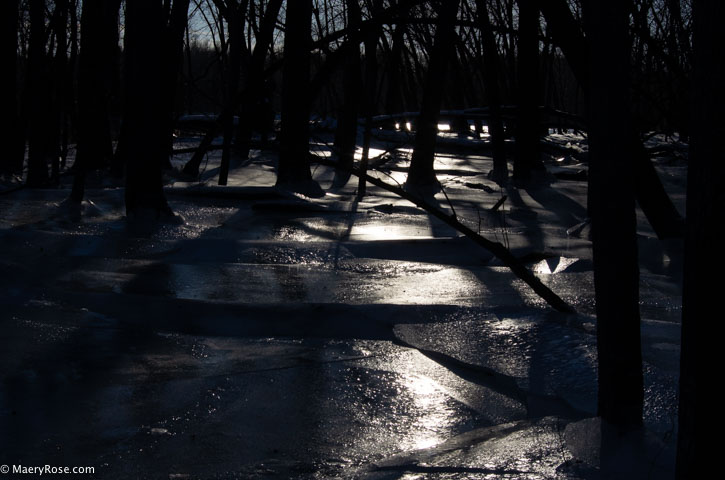 The protagonist takes steps to solve the problem or achieve their desire and may even appear to be getting somewhere, but at some point, they fail or run into a wall and the situation seems impossible to overcome.

The old crone struggles to regain her right arm’s mobility and strength. She does exercises three times a day to stretch her tight muscles. For awhile she sees gains, but eventually, her progress seems to slow and then halt altogether.  The pain at times feels like too much and she only goes through the exercise motions, trying to not lose everything that she’s gained.

The world becomes a dark, cold place. For one thing, it’s winter. For another, she’s sleeping with ice packs on her shoulder and arm.

When it appears that all is lost, the protagonist makes a discovery or has a breakthrough. This changes the main character and her life in some way.

I’m a little stuck on this part of the story, since I haven’t experienced it yet. I’m pretty sure I’ll be journaling and blogging my way through what I perceive to be discoveries and breakthroughs that turn out to be gimmicks or distractions. For now, I’ll let myself fantasize…

In early February, the old lady went to an appointment with an endocrinologist, who specialized in osteoporosis and thyroid disease. The doctor glowed with healing powers and knowledge. She offered the old woman a magical potion that not only reversed her osteoporosis to an acceptable osteopenia level but opened her mind to secret knowledge she was able to pass on to others. 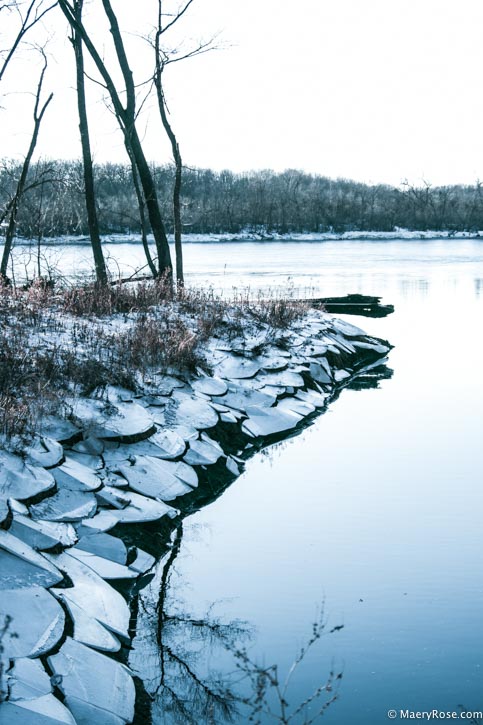 Life is more than a story. For one thing, there are more crises in a lifetime than you can possibly fit into a book. And because of that, the change or transformation is not as neat as it is in a tale.

We are all little transformers. We change. We grow. We fall back into routines and take things for granted until, KAPOW! We start the whole process over again.

I don’t want my change or transformation to be that I realize how precarious life is and avoid anything that looks too risky. Because, right now, going up and down stairs feels risky.

And I don’t want the change to be that I focus my entire life around my health – reading everything I can lay my hands on about nutrition and building bones and avoiding inflammatory foods.

I don’t want to become obsessed with always doing all the “right” things nutritionally and exercise-wise, without  including any thought on what makes life enjoyable. Nor do I want to say “Screw it, nothing I do matters anyway. I might as well just eat, drink and be merry.”

I would rather do as my doctor suggested and concentrate on what I can do. And even more than that, what I wanted to do before I injured myself and how that still fits into my current reality with fragile bones.

That letting go of “fixing it,” “fixing me” is the most magical thing when I manage to pull it off.

I am enjoying my time to write, read, play my piano, take walks with Java, do a very modified form of yoga, sit with my lavender-scented microwaveable heating pad while I look out the window at the squirrels and birds drinking out of our pond, and remember that I don’t have to be or do anything more than that. 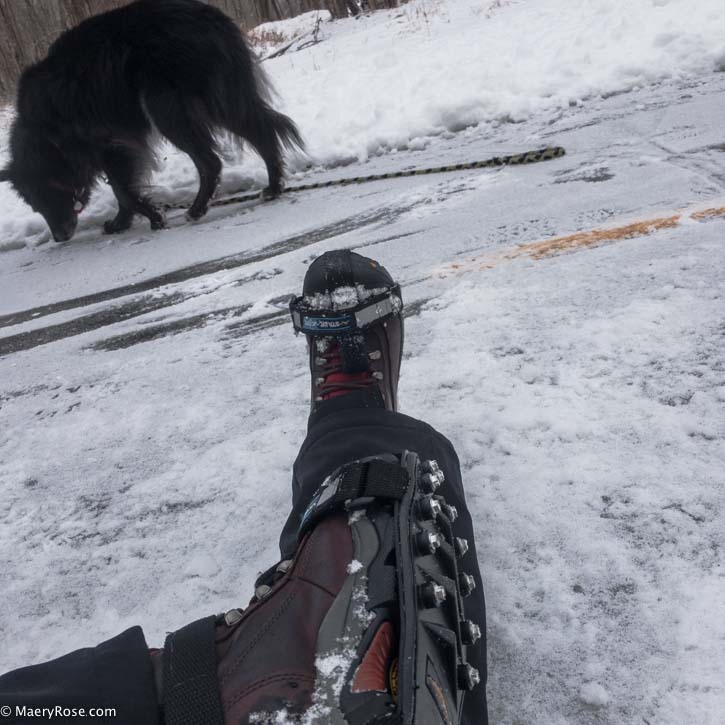 No, I didn’t fall. Just had to sit down to get a shot of what allows me to still take walks during a very icy winter in Minnesota. These are STABIL Icers. I wanted something that goes high over the toes and secures around the ankle as my old pair of cleats were always falling off. Be careful out there peoples!

0
« Putting a Brave Face On
Noticing and Seeking Pleasure »