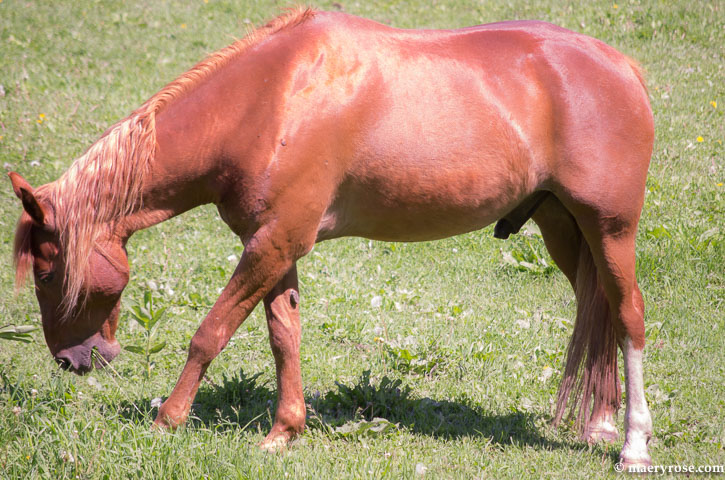 Last Friday I moved Luke out of his familiar home of the past five years to a new stable. Luke hasn’t been on a trailer for two years and I haven’t hauled a horse for three years so it felt like the first time again.

I decided I was going to approach the loading as if it was routine and it turned out that it was. Luke walked right on, stuck his head out the window, where Steve was waiting to clip his halter, and started munching on hay. Obviously taking things more in stride than I was.

The drive was without incident, except for a heavy rain that started up and the road spray the semis were throwing at us.

Unloading and getting Luke settled in also went well. When I left the barn, Luke was still in a stall, while the barn manager and owners waited for the rain to stop before putting him into a pasture.

When I went back the next day, I was told that Luke quickly established that he wasn’t going to take crap from anyone. He and the other three horses he’s out with were soon acting like they’d been in the same pasture together for years. 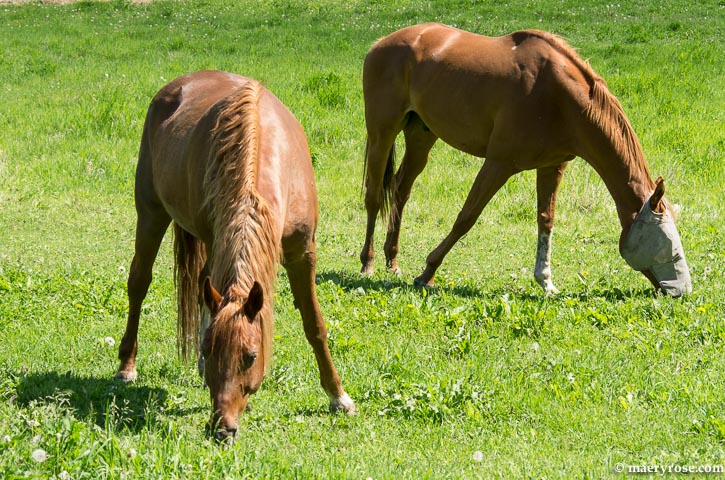 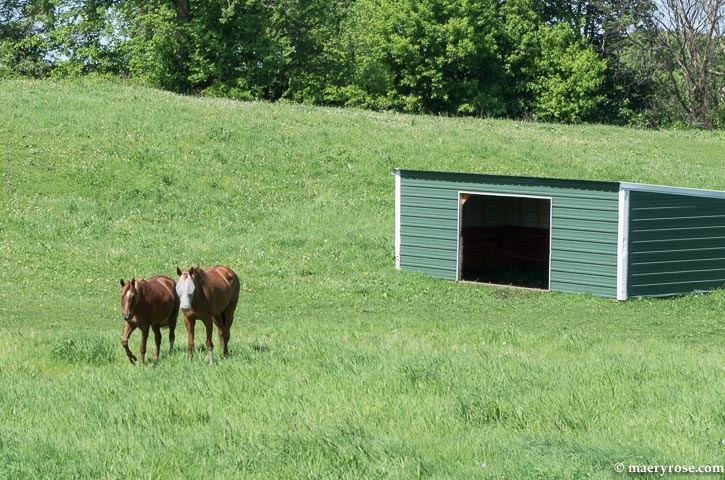 There was a schooling show that Saturday so I got to watch a few people warm up and ride their tests. 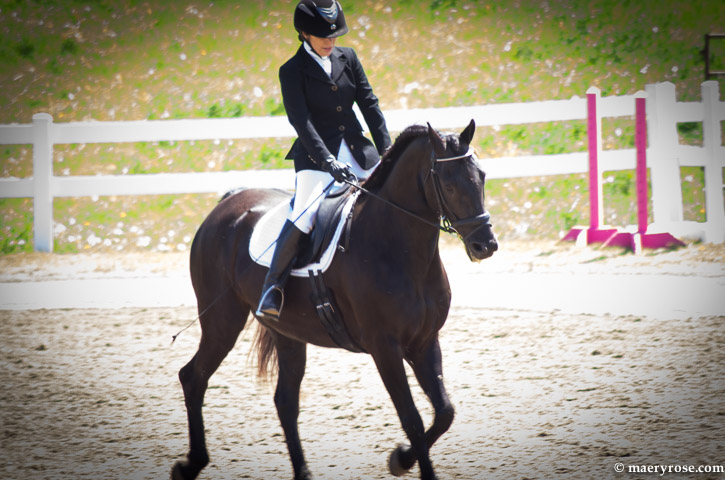 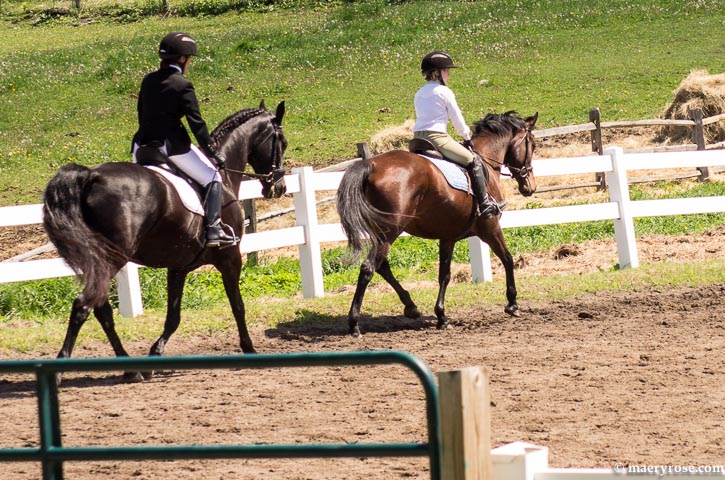 The mares were putting on their own show. Note the one quarter horse who stands and watches… 🙂 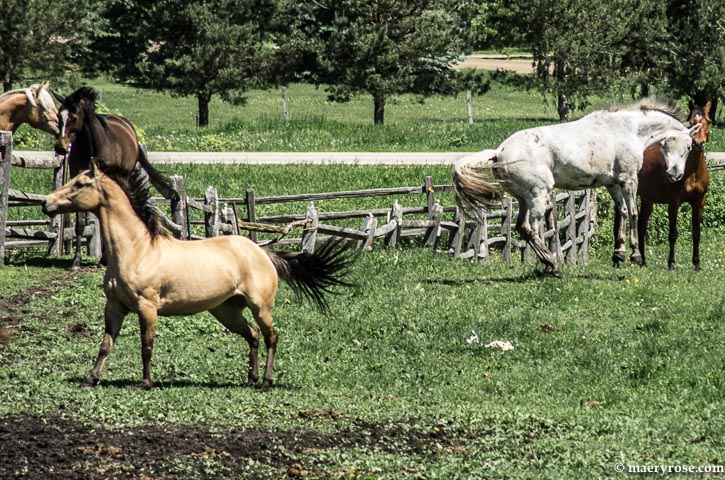 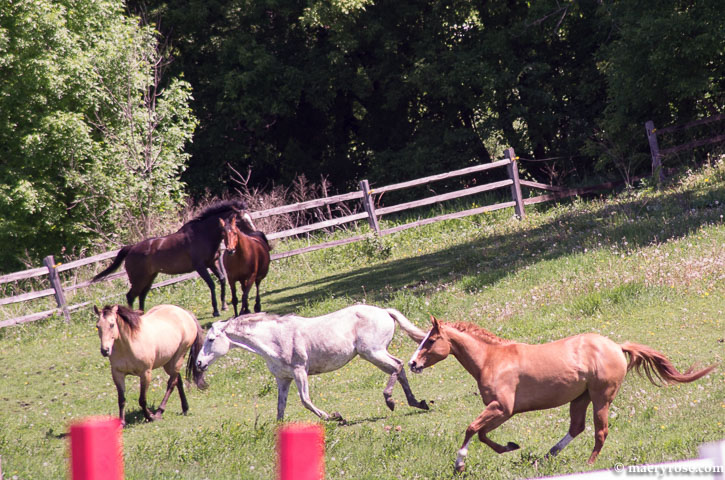 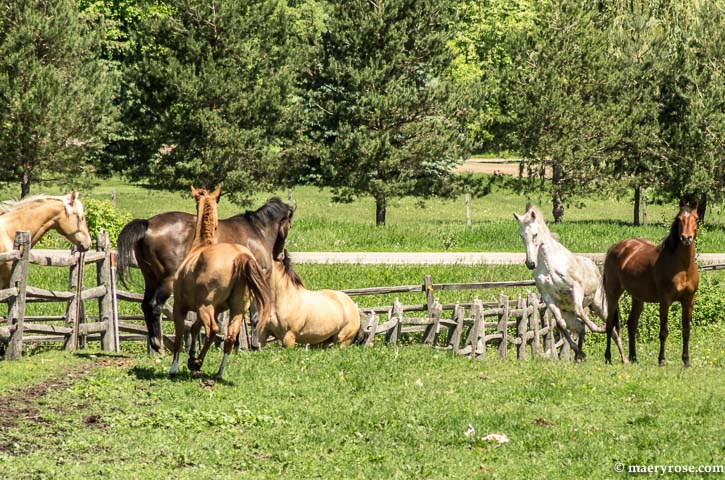 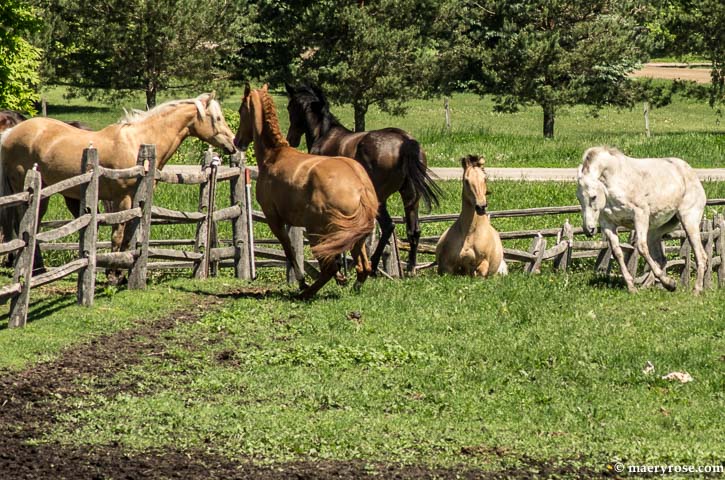 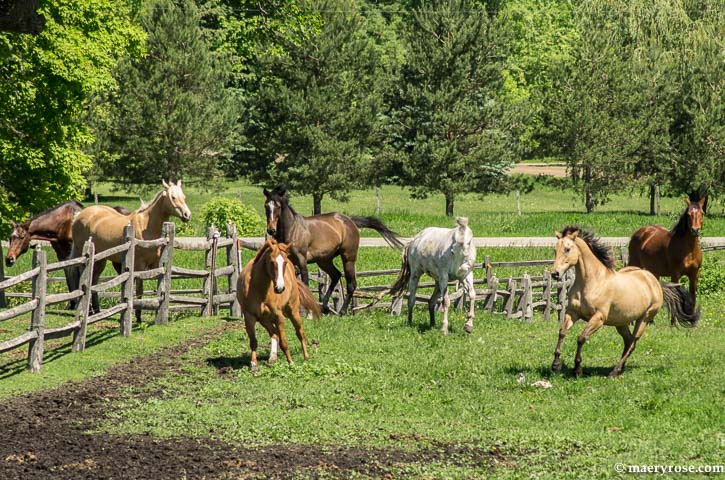 When I went back to ride Luke on Tuesday, he didn’t run away from me (as I thought he might with so much area to run away into). He called for his newly found friends for a few minutes but then quieted down. We rode both inside and outside, where he gawked at new things and didn’t know what to make of all the  horses pastured around the outdoor arena, but we had a good ride. 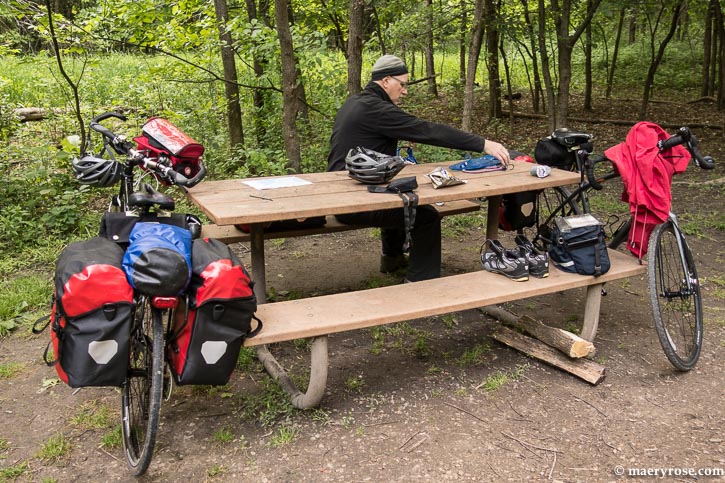 I didn’t get back to ride Luke until Tuesday because Sunday Steve and I did our first mini-bike tour —  riding 56 miles to Carver Park reserve where we camped overnight. We rode back home on Monday. It was quite the learning experience, which is what the brief trip was intended for, I just didn’t know how big the learning curve would be.

The unfortunate reality is that you end up bringing almost as much gear if you are only camping one night as you would if camping a whole week. We had our two-person tent, sleeping bags and pads, freeze dried meals, propane, lightweight single-burner stove and cookware, rain gear, pack towel, headlamps, and clothing and shoes to change into at the campsite.

Oh, and we had compact chairs to sit in around the campfire. One could say those were unnecessary, but I can tell you that they were a very welcome comfort to settle into after riding all day. So much better than sitting on the cold metal picnic table bench. 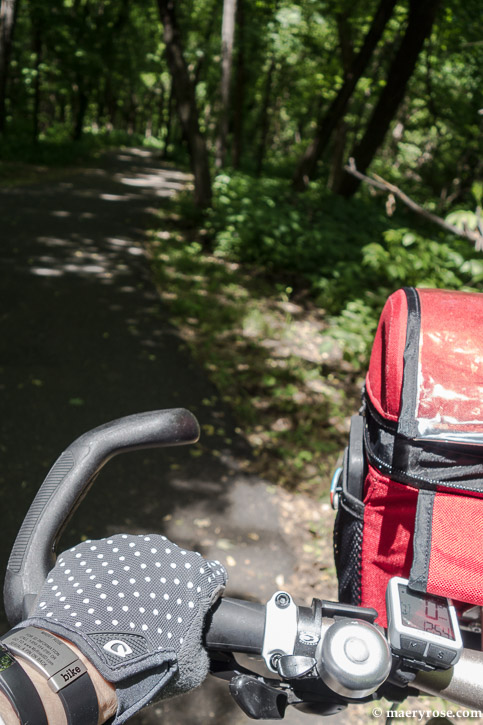 It got down to a damp feeling 49 degrees Sunday night so there was much layering of clothing that was put on and then taken off as Monday heated up. I think I started out Monday riding with bike shorts, tights, sweatpants, t-shirt, base-layer, fleece shirt and windbreaker. I ended up only wearing bike shorts, t-shirt, and arm warmers.

Our total round trip ended up being 103 miles. The extra miles on Sunday were due to construction we ran into in two spots and VERY badly marked bike path detours. Most of our riding was on regional or state bike trails through the woods, with a few jaunts on county roads and through neighborhoods. Most of the trail was paved, with a few stretches of crushed limestone. It was a beautiful ride with a combination of thick trees, wild flowers, meadows, and wetlands where we saw deer, herons, hawks, and wild turkeys with their babies. 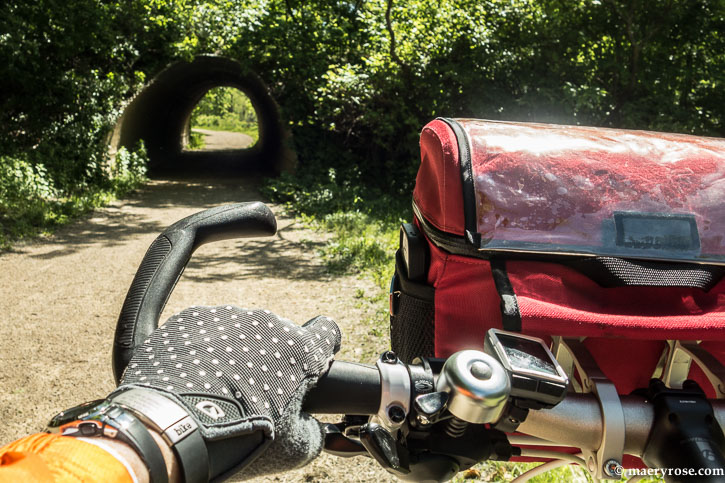 Google maps told us the ride would take about four hours… try seven. I guess they didn’t add in the bathroom, food, water, photography, look at maps and try to figure out where the hell you are and which direction you should go, and the plain old “rest and stretch” stops.

The weight on the rear of my bike was around thirty-three pounds and there was maybe five pounds in my handlebar bag. Steve carried about seven pounds more on his bike. This was actually a light load compared to what I’ve seen people post that they carry on their bikes. Of course, most of those people are not in their very late fifties. 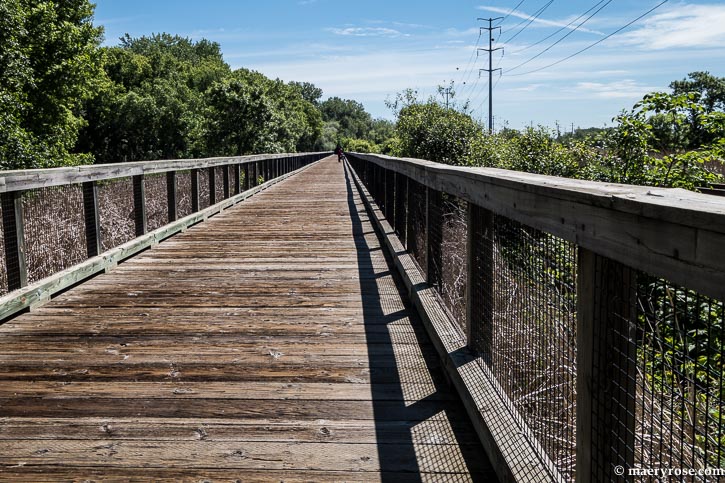 We knew the weight would make a difference in how the bikes felt but I didn’t realize how much difference until I tried to standup and pedal to power up a hill and felt my bike’s back end shimmying back and forth — I quickly sat back down.

Even small inclines seemed to require gear changes as the weight pulled at the bike, especially towards the end of the ride, when we were more tired. A few hills I got off and pushed and pulled my bike, which may have been more work than riding, but I needed to give my knees a break.

Neither Steve or I have actual “touring bikes.” My bike is a hybrid, all aluminum bike and Steve’s is an aluminum road bike with a carbide fork. My wheels have more spokes than Steve’s do, which I’ve read is a good thing for touring. I plan to ask more experienced people to see if there’s anything we can do to make our bikes more suitable for carrying a load. Neither of our bikes are built to have racks put on the front, although there are racks out there for bikes with front suspension, like mine.

What might help even more than changes to our bikes is more long distance rides on weekends to build up those leg muscles!

So would I do it again? Definitely! 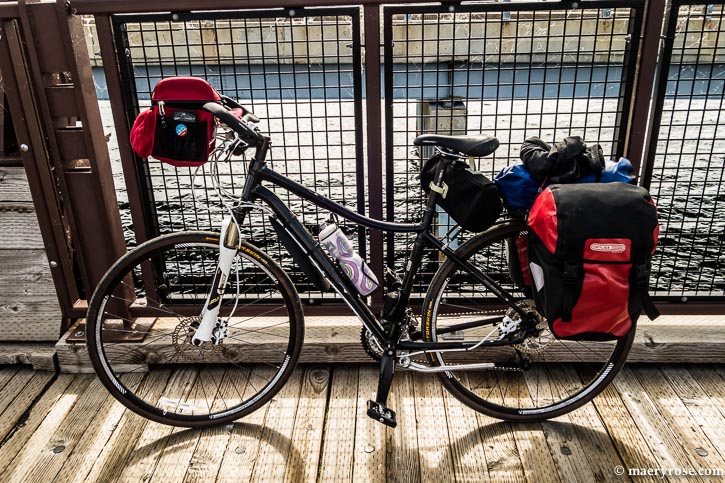 « Everything I Know I Learned From Plants (and dogs)
Disturbance »