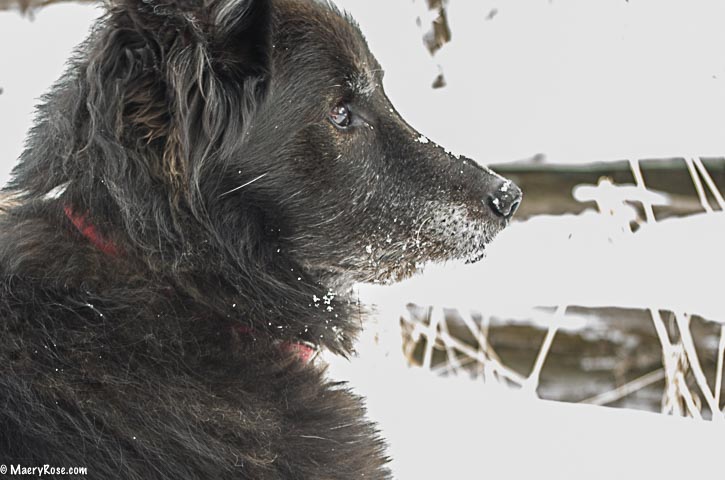 For the last month or so, I’ve been caught up with questions about my life.  Maybe this comes from recent health issues or thoughts about retirement, but the flood of questions goes something like this:

About a week before my 61st birthday, I rented a hermitage at the Christine Center to have three days away to rest, reflect, read and write – the four R’s.

I’ve been stuck on revising the first draft of my manuscript for quite awhile now and had hoped to get a fresh start or at least work out a plan on how to progress. Because, certainly, one can only get so far on revising 257 pages in three days. 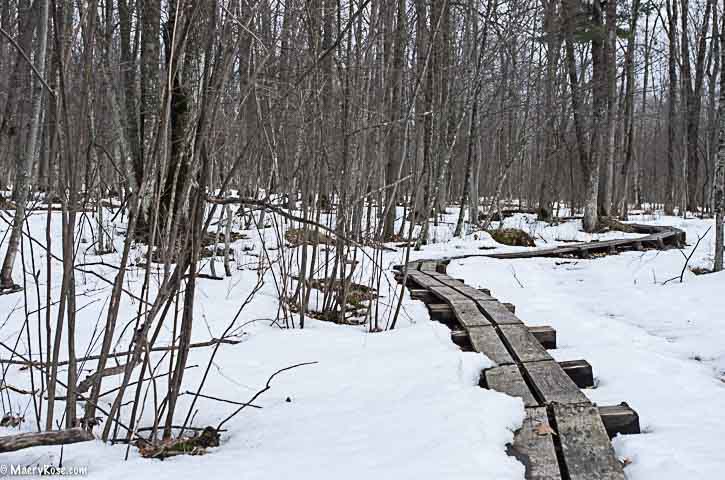 It was a good time of year and a good place to get away. The surroundings were pretty monotone, and except for the first day I arrived, it was cold out. I still took a daily walk through the woods. There were paths marked with the four elements – Air, Fire, Water and Earth. None of the paths were very long but they were enough that I could meander the labyrinth for at least an hour – long enough to unkink my back and shoulders and give my brain a rest.

The only color I found on my walks was in the moss growing, a life form that I find beautiful and fascinating. 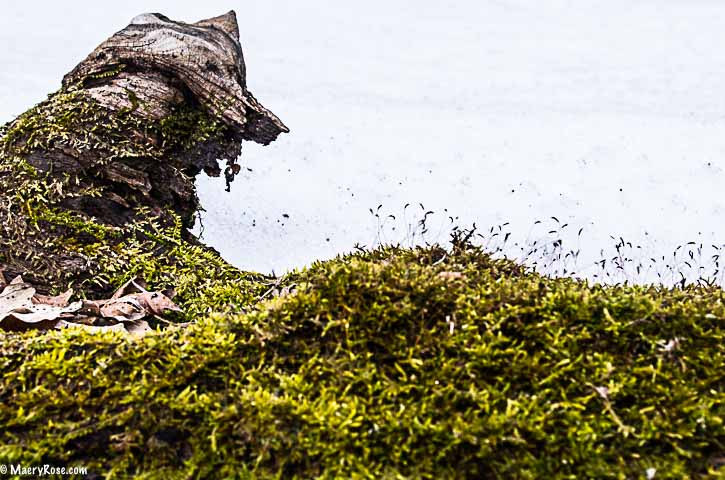 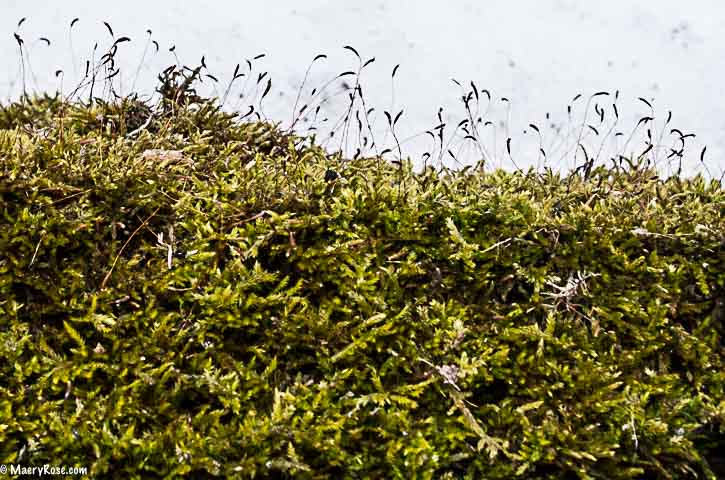 On the Water Path, I ran across eight does, their faded-gray fur making them almost invisible amongst the trees. We watched each other for a little while, until I turned around and walked the other way, leaving them to continue with their day, undisturbed by me.

It was so quiet in the woods that when a crow flew over me, I could hear the sound of the air moving as he flapped his wings. When I walked past a poplar tree, the breeze softly fluttered the dry leaves on the branches. As the wind crescendoed into a gust, the leaves followed the orchestration, making the sound of a snare drum roll. Drawing near to a grassier area, I stopped and smiled, so happy to hear the sound of sand cranes calling. They must have returned from their migration south. And though I was walking on a mix of snow and ice, I knew that spring couldn’t be far off. 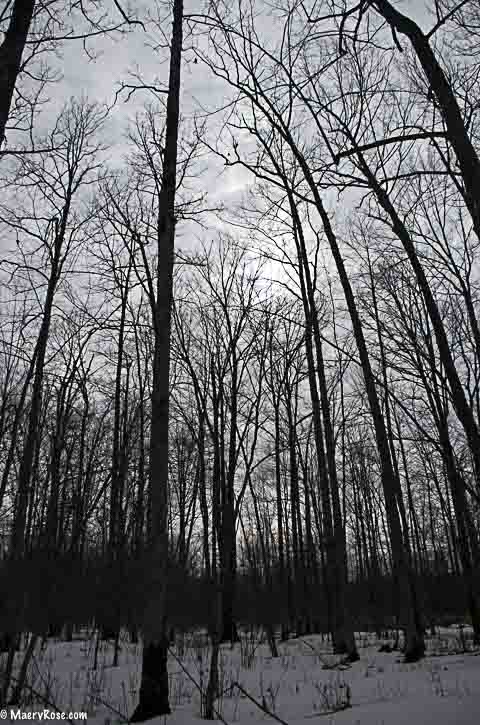 There was no wifi in my cabin to enable electronic distractions. Even the phone service was spotty and was the one bar, 4G sort. I could go to the Retreat Center, where there was a library with wifi service, but it was so slow I rarely used it.

My time away did not go as I thought it would. Does anything? I didn’t reach my goal of knowing exactly how to progress with my writing work when I got home.

Instead, I had moments of deep grief over recent and past losses, followed by the pain of seeing the patterns I’ve been stuck in and what they have done to me and to others in my life.

Which led to seeing more clearly the cycle of life I’m in right now. And that realization led to a gut-deep knowing that things have got to change.

And though I’m not happy about it, along with that knowledge came the reluctant realization that the 257 page story I wrote is not the story I’m going to have after I revise it. The reason I’m not happy about this is because writing a book is a lot of work. I had known I’d need to make changes to improve my work, but I had no intention of making drastic rewrites and generating entire sections of new material.

As I reviewed the story looking for themes, specifically one theme that would tie the entire book together, I saw how I’d been more of an observer of my life than a participant. It’s a fear-based way of living. It’s a pattern that thinks more about approval and looking for meaning and happiness and love externally rather than looking within yourself. It’s a search that doesn’t include giving to others what you most want to receive because you are so afraid that what you give is inferior and will likely be rejected. And you aren’t willing to take that risk.

I hesitate to reveal this next part as it could seem very weird to some people and possibly satanic to others but to hell with it! I am not looking for approval any more!

Lately, I’ve been drawing daily Tarot cards. I don’t believe they predict the future or even what’s happening right now but they give me food for thought and a starting point to get at what is lying below the surface of what I think I am thinking and what I think I know.

I was doing just fine at the start of my time away when I drew the Emperor (protection, stability, clarity of mind, strength) and the High Priestess (mystery, psychic wisdom, stillness, intuition), but on Tuesday, I drew the Eight of Swords.

First of all, let me describe the drawing on the Eight of Swords card in the “The Wild Unknown Tarot” deck, created by Kim Krans, that I was using. It shows a chrysalis hanging on a sword with seven other swords pointing upward at it. This represents being trapped, powerless, feeling like a victim, and being surrounded by obstacles. These obstacles can be more about a person’s perceptions than actual people or things that are holding a person back.

The question I asked before I drew the card was, “What are my gifts and how can I use them?”

I didn’t like the answer the card gave me so, silly me, I drew another card, hoping for a ray of sunshine.

I drew the Three of Swords, which has a drawing of three swords wrapped in a cord and dripping blood. Oh yeah, lets bring the idea of betrayal, heartbreak, and turmoil into the mix.

Okay. If I draw one more card, it has to have something positive on it, right? Wrong.

Eight of Cups – a dark mountain and eight broken goblets scattered below representing stagnation and ill health – “urgent message to pack your bags and move on… Nothing good remains for you here.”

I didn’t draw any more cards.

I didn’t need to. Given my reflections in the days prior to this, these three cards made sense.

The Eight of Cups message is that “There is no hope of rekindling what has been lost.”

Note to others, especially younger people: please start learning about nutrition and what your body needs to remain as strong and healthy as possible. There’s so much bad food and misinformation out there. Don’t wait until the damage has already been done like I did. A life with less to regret is a very good thing, and your bones, brain and body will thank you for your efforts. This has been a Maery announcement. Now back to our regular programming…

While there is grief that accompanies letting go of those things I mentioned, the acceptance of change has been good. I’m learning a lot about food and the body. I’m meeting new people at the health club — all sorts of people — from grunting weight lifters to elderly people like me. It’s kind of like visiting a foreign country – a cultural broadening adventure. And I’m excited about challenging myself with the long-distance, bike-touring rides I’m planning for this year.

The Three of Swords that I drew I believe is more reflective of the past, where there were plenty of lies, heartbreak and betrayal. This card indicates that I shouldn’t make any decisions but should allow myself time to heal. Well, I think that’s what I’ve already taken time to do. It’s time to move on…

And listen to the Eight of Swords and Eight of Cups. I can’t just keep hanging upside down on a sword, waiting to fall onto seven other swords, or stand at the foot of that dark mountain, trying to glue the goblets back together and refill them with spilt wine.

It really is time to pack my bags and leave behind thoughts and habits I’ve held onto for way too long. Not with a feeling of sadness or fear. I don’t have to toss everything out and start over. No, where I’m at right now is a good place because it’s the place I’m in. 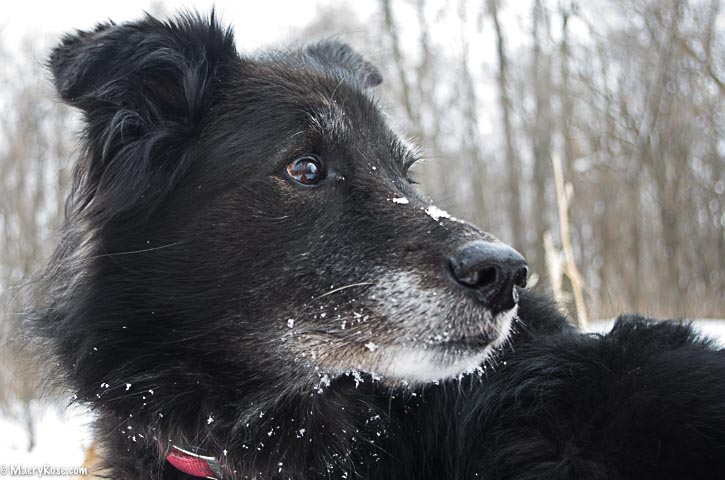 « Limitations; Real, Imposed and Imagined
Getting Out of My Comfort Zone – Storytelling »